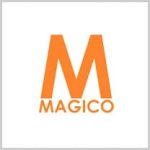 The S1 is a sealed, two-way floorstander, with a cabinet made of solid aluminium that sits on heavy outriggers and armor-piercing spikes.

The S series are still built on a thick aluminium skeleton, with the aluminum tube that forms the outer cabinet and the top and bottom plates bolted to this frame. That outer cabinet in the S1 is a fascinating bit of engineering in and of itself. It’s a solid aluminum tube, a softly curved triangle in cross-section with the base of the triangle forming the front baffle of the loudspeaker. Yet again, this is the kind of small-batch engineering development that’s only possible if you own the means of production. This makes for a seamless loudspeaker (there are holes in the tube for the drive units, one each for the large red and black speaker terminals and a back plate for the logo at the front and the serial number at the back). Protective grills are supplied too.

The tweeter is the MB30 25mm beryllium dome unit found in the Magico S5, while the single mid-bass driver is a 178mm version of the 165mm M380 mid-range driver also found in the S5. However, where the M380 had a pair of 250mm bass units bringing up the rear, the M390 unit has to reach further down into the bottom end, in a manner not dissimilar to the 178mm Neo Tech unit found in the Q1 standmount. On paper at least, the performance of the Q1 standmount and S1 floorstander are identical, but although they have commonalities of performance, they are actually very different beasts with very different clientele.

The M-Coat S1s arrive in one large packing crate, containing both loudspeakers (the M-Cast version comes in two separate boxes). Both are sturdy and mean the speakers are very likely to arrive in once piece no matter how determined the haulage company. The downside is they are so well packed the loudspeaker is almost impossible to extract without the manual and an assistant with socket set in hand. The speakers are relatively position independent, although the usual equidistant to side and rear walls, slight toe-in rules apply. This is not a loudspeaker that demands micrometer precision installation, but the more you put into installation, ultimately the better you get out of the speaker.

The same applies to partnering electronics. It’s not a malign load (relatively low 86dB sensitivity and a four ohm load that appears to dip a bit in the upper midrange), but it’s a powerful temptation to declare this solid-state only.

While you can play a piece of music louder or quieter than its happy place, the ideal volume level for any given album will snap that album into sharp focus.

The Magico way is one of absolute honesty and in a smaller loudspeaker that can be something not normally encountered. The loudspeaker has a legitimate lower  frequency cut off point of around 32Hz.