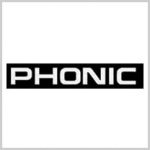 The MU2442X is a great choice for anyone seeking a powerful and flexible rack-mountable mixer.